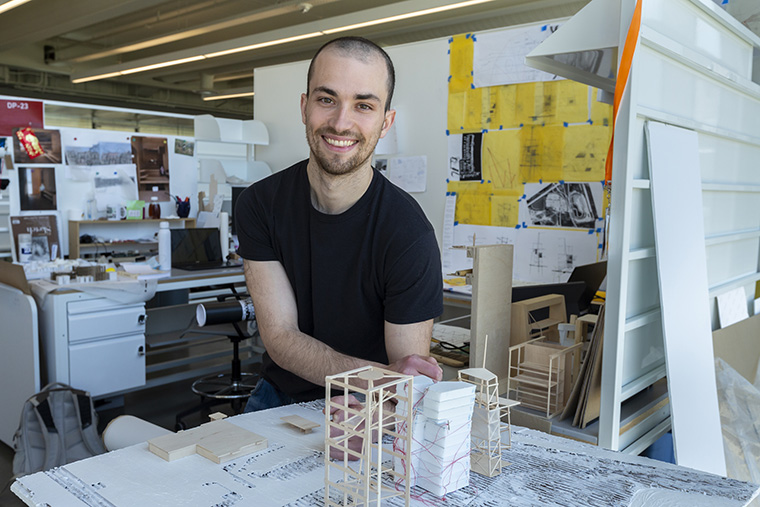 Misi-ziibi means “great river” in the Anishinaabe language. For the native people of upper Minnesota, misi-ziibi refers to the 1,300-mile long stretch that flows south of the Crow Wing River past present-day St. Louis and into the Gulf of Mexico.

But the name isn’t the only thing drawn from the Anishinaabe, says Nathan Stanfield, who is expected to earn his master’s degree in architecture this spring at Washington University’s Sam Fox School of Design & Visual Arts in St. Louis.

“Water connects us, both literally and metaphorically,” Stanfield explained. But where traditional Native practices largely harmonize with the natural topography of the Mississippi, since the 1930s large-scale public works have transformed the river into a highly constructed and actively managed system – a profound change with consequences for the unforeseen and unrecognized times.

“I wanted to understand the impact of these infrastructural interventions on Indigenous land and water,” Stanfield said. “Who was hit? Who was moved? And how can we support Indigenous sovereignty and environmental stewardship? »

Raised outside Boston, in Dorchester, Mass., Stanfield earned a bachelor’s degree in architecture, as well as a minor in philosophy, from the Sam Fox School in 2018. “The minor was almost accidental,” Stanfield said in laughing. “I had taken so many philosophy courses that I realized that I only needed a few credits.”

After a summer internship with the Kansas City architecture firm Populous, Stanfield returned to Boston as a project manager with Maryann Thompson Architects. There he served as lead designer for the net-zero renovation of a private modernist residence, among other projects.

But Stanfield stayed in touch with his former professors, especially Derek Hoeferlin, who holds the chair of landscape architecture and urban design. In the fall of 2020, as COVID-19 wreaked havoc on the architecture and construction industries, Stanfield returned to WashU as a Sam Fox Ambassadors Fellow.

“As a kid, I loved drawing, I loved building things, I loved math,” Stanfield said. “The architecture seemed to cover those bases.

“But architecture can also be a medium for conversation and public awareness,” Stanfield added. “What changes need to be made and how can design contribute? »

In many ways, “Decolonizing Water” grew out of Stanfield’s work with Hoeferlin for “Exhibit Columbus,” a sprawling invite that takes place each year in the small but architecturally prestigious city of Columbus, Ind.

Hoeferlin, an authority on water-based design, had assembled a team to develop “Tracing our Mississippi”, which would investigate “the relentless infrastructure controlling the landscapes, communities and resources of Mississippi”. The installation debuted in August 2021 and included large-scale models (designed, machined and assembled in Sam Fox School’s Weil Hall) as well as oral histories and public outreach events.

“The collaborative project wasn’t exactly the model,” Stanfield explained to Archinect, but rather the “research-intensive process of making and learning by making”. At the same time, the team aspired not only to communicate the reality of how the river works today, but also “the unsung story of the erasure and manipulation of Indigenous communities and watershed ecology”.

Recently, Stanfield presented his degree project, which explores material extraction and waste economies in the floodplains of the American bottom east of St. Louis. Titled “DIY,” the proposal examines the potential for recycling plastic bottles into wall systems. It also highlights the tense juxtaposition of Cahokia Mounds, a UNESCO World Heritage Site marking one of the largest pre-Columbian towns in North America, and Milam Landfill, a 20-story trash heap located approximately 3 miles.

“People often confuse the landfill with Monks Mound (from Cahokia),” Stanfield said, shaking his head. Problematic symbolism aside, “having a landfill in a floodplain is a major issue. If the water ever goes over the levees,” such as during a flood or seismic event, “the ramifications will affect the entire region.”

music of the sphere

In recent months, Stanfield has also explored the relationship between architecture and sensory experience, especially music. On May 14, he will present an original composition at WashU’s Mildred Lane Kemper Art Museum as part of the multimedia showcase “Kemper Live: Here and Now.”

Stanfield’s piece, titled “Pendulum”, was created in response to the two “A sound, a signal, the circus,” a new multi-sensory environment from artist and filmmaker Nicole Miller, and Olafur Eliasson “Your Sight Imploded” (2001), a 661-pound aluminum sphere suspended from the ceiling of the museum’s Saligman Family Atrium.

As an architect, “you can learn from things that aren’t architecture,” said Stanfield, who designed “Pendulum” as a “sound dialogue” between Library of Congress recordings and cartography by ultrasound of the speed and trajectory of the sphere when set in motion.

“Architecture is actually very similar to music,” Stanfield added with a smile. “It’s a process of iterating, critiquing and working through layers of information.