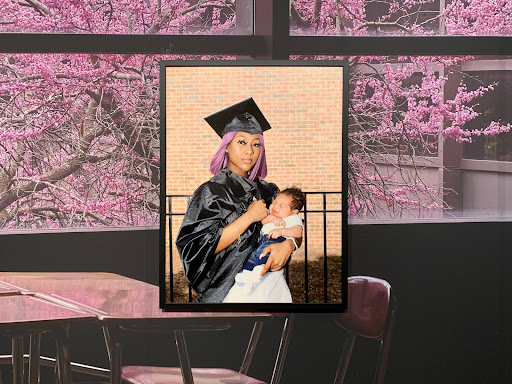 EXPO 2022: Special exhibitions inhabit the periphery of the art world

The first thing I discover about the special exhibit booths at the EXPO is that few of the workers who attend know what makes them “special exhibits.” Some of the speculative responses I got included, “we don’t usually show art”; “their art is for sale, ours is not”; “we give the public ‘something else'”; and, my favorite, “they bought booths, we got a special offer from a festival trying to fill an EXPO in the age of the pandemic.”

The official distinction of the EXPO is that it is about institutions, museums and non-profit organizations of the art world. These are, both figuratively and literally, the cabins that make up the periphery. Here are a few that stood out, and why.

Walking to the Weinberg/Newton booth is walking to the front door of 7250 South Green. A picture of the house features prominently in the large gallery stand. The house is condemned and its snowy courtyard is particularly neglected. A sign informs visitors to the booth that the house was ‘legally stolen’ from a black resident in 1962. ‘Well, they do this every day, that’s all they do – steal land’, announces a passerby to no one reading the sign. Weinberg/Newton is a non-commercial gallery that exhibits projects that address and tackle social justice issues. The photo presented on the stand is of Tonika Lewis Johnson, one of the three artists in the exhibition. The exhibit is an excerpt from Johnson’s “Inequity for Sale” project, a work that digitally identifies and physically marks homes in Englewood that have been sold to black owners under shady land sale deals. The impact of this booth has little to do with this booth – it’s an exhibit that, for many Chicagoans, hits close to home. Other works included are those by Isabel Strauss (“On Collage”) and Riff Studio (“Architecture of Reparations”).

Photos by Marzena Abrahamik, on display at the CPS Lives booth.

CPS Lives is an arts residency program that places artists in Chicago public schools. That fact alone makes this stand stand out, but the art inside makes it stand out even more. Marzena Abrahamik, photographer and educator, created portraits of students from the school she worked with and superimposed them over vivid photos of the details of the school day. The photos are striking – a surreal saturation blends with everyday scenes. Norman Teague, the other artist whose work is on display, is a designer and educator. For his residency, he worked collaboratively with students on furniture, then incorporated his experiences with them into his own design work. 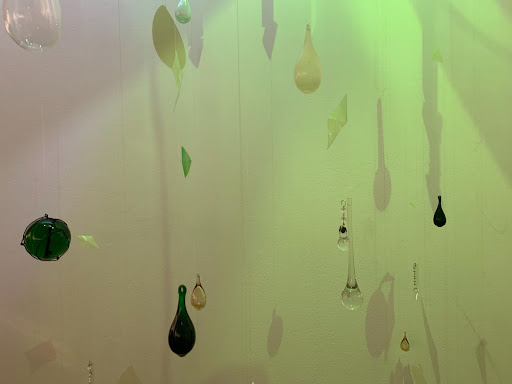 6018 North is an experimental gallery based in a dilapidated mansion in Edgewater. Their green and white booth with the word “sustainability” scrawled on its front wall stood out as the most interactive booth at the fair. At a small stand facing the aisle, a young man greets me and asks me to write down what I would be willing to give up to create a more sustainable future. I cheat and write “meat” (I’m already a vegetarian). He tells me that a lot of people write that. Gallery owner Tricia Van Eck appears around the corner with a crystal (recycled from a bankrupt chandelier store). Anyone who contributes can hang a crystal on a growing light installation by Dana Major. The crystal itself got tangled in a fishing line when we hung it up, which is a testament to the mess we’re in and the collaboration needed to get out of it, Tricia tells me. I can’t tell if that’s part of the piece or if she’s just really good on her toes.

It’s also worth your time:

Artadia (136) awards grants to mid-career artists in seven cities. The works on display were from last year’s Chicago Fellowship recipients and were some of my favorites at the EXPO. But I mostly shout it because I love seeing artists get paid.

Opening (130), due to his heritage. And because of their book table. Who at an event like this doesn’t love a good coffee table book?

Center for Native Futures (421), a nonprofit organization founded during the pandemic to “make space for a perpetual Indigenous presence in the town of Zhegagoynak (Chicago).” The large booth presented, cohesively, the work of eight distinct artists, while managing to give them all breathing space.

Data (417), an online gallery (“Zoom is our headquarters,” the booth manager tells me) that was the only booth to say “NFT.”

Museum of Science and Industry (449), to have one art exhibition per year, for fifty years. (Parker Yamasaki)