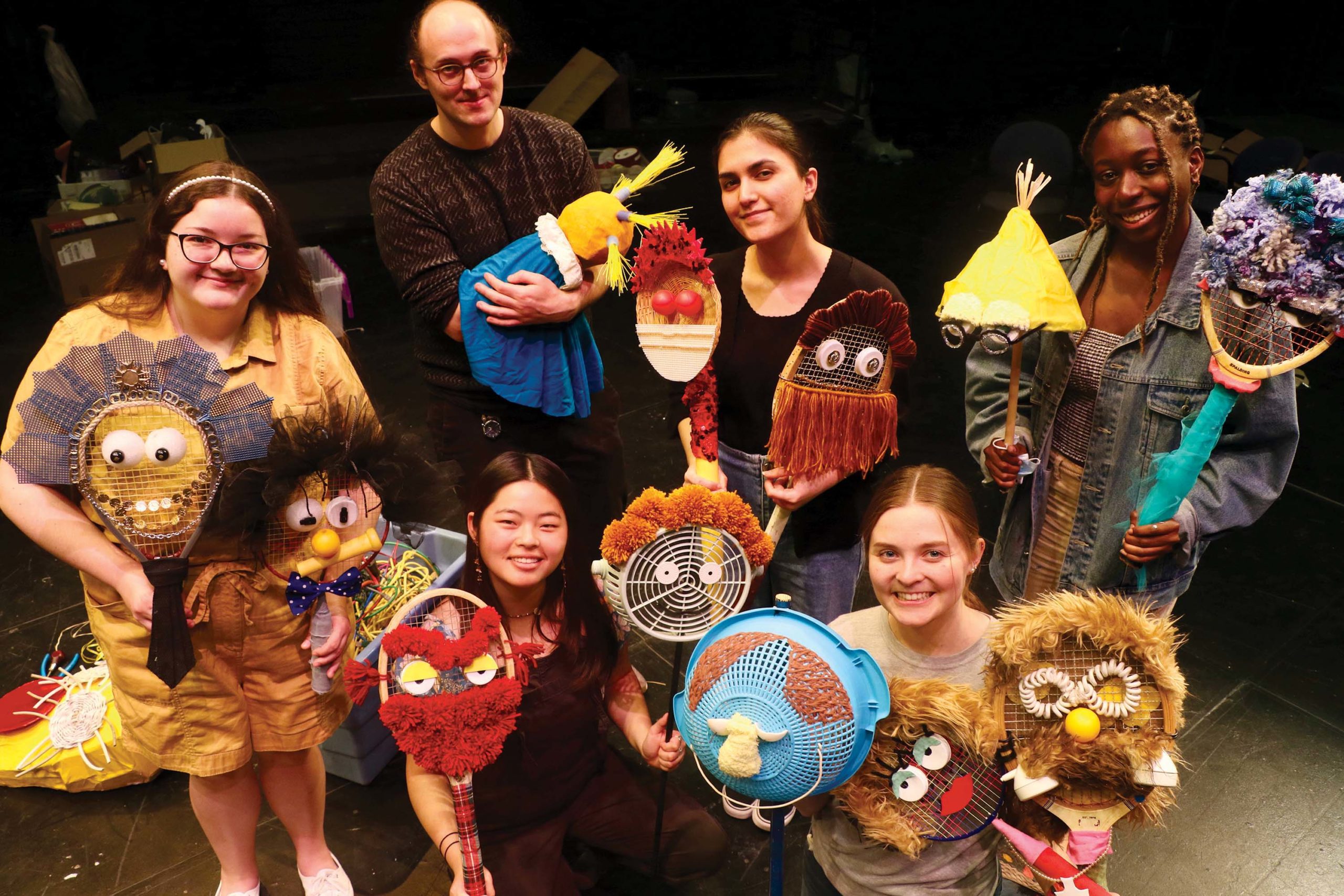 ‘M. Burns’ helps us understand the impulse to create

When we think of “theater”, we often first visualize great actors or singers, or perhaps period costumes or directors, but what about the lamp, the mirror, the carpet , handkerchiefs, hat, suitcase, binoculars, apple, mask…. you know, accessories.

Yeah, and the accessories?

“Props are where the fictional world collides with our own material reality,” explained Noah Mease, a props designer who works with Middlebury College’s theater department as a props designer for the upcoming piece “Mr. Burns, a Post-Electric Piece” by Anne Washburn. “There is so much to express about the characters, the world and the story through simple choices: Which lamp? Which chair?

Props – and the whole idea of ​​theater – are at the heart of “Mr. Burns” (which really refers to the character from the TV show “The Simpsons”).

Mease grew up in Williston and first discovered theater performing Shakespeare plays and musicals in college under the direction of Al Meyers. In high school (at CVU), Mease followed his enthusiasm for acting and found his niche “building the sets, making props, creating the world of the play with my hands”. And under the mentorship of Sebastian Ryder, Mease wrote and produced a full-length play.

“At Middlebury College I continued to study acting through class work, work-study in the stage store, extra-curricular student shows and a weekly radio drama program which we produced on the college radio station,” said Mease, who graduated in 2011. “But I was also studying everything — I also majored in Spanish with a focus on Latin American literature; I was doing everything liberal arts stuff, following my own interests in all directions.Art was the tool I had to synthesize everything I learned.

After graduating, Mease moved to New York for an internship and then began her freelance journey.

“The last decade has been a whirlwind of good and bad projects, late nights, music, ups and downs,” he said. “I’ve produced three of my own plays in New York and designed props for new plays and musicals on Broadway and elsewhere.”

Some of the great shows Mease has worked on include: “Natasha, Pierre & the Great Comet of 1812”, “Hadestown” by Anaïs Mitchel, “The Lucky Ones” by Abigail and Shaun Bengson and “An Octoroon” by Branden Jacobs-Jenkins.

“At first, being involved in prop design was a way to get involved with theater artists that I looked up to,” said Mease, who now lives in the South Bronx. “I didn’t want to watch and help, sit on my hands and watch people work. Through props, I could get my hands on everything, talk to all departments, and make a real contribution to pieces as they were born while forming my own artistic sensibilities.

Mease was recognized by the American Theater Wing with an OBIE Award.

“It stands for Off Broadway Independent Excellence and is intended exclusively for off-Broadway theater,” Mease said. “The awards have been given since the 1950s, but as far as I know, I’m only the second person in its history to be recognized for designing props.”

One day, Mease received an “out of the blue” call from his former Middlebury College adviser Alex Draper inviting Mease to come and be a part of their production of “Mr. Burns.”

“It’s like I was dreaming this project to be,” Mease said. “‘The Simpsons’ was one of my first windows into wider American culture (for better or worse) and I love the densely referenced and ultimately hopeful sense of humor of the series.” 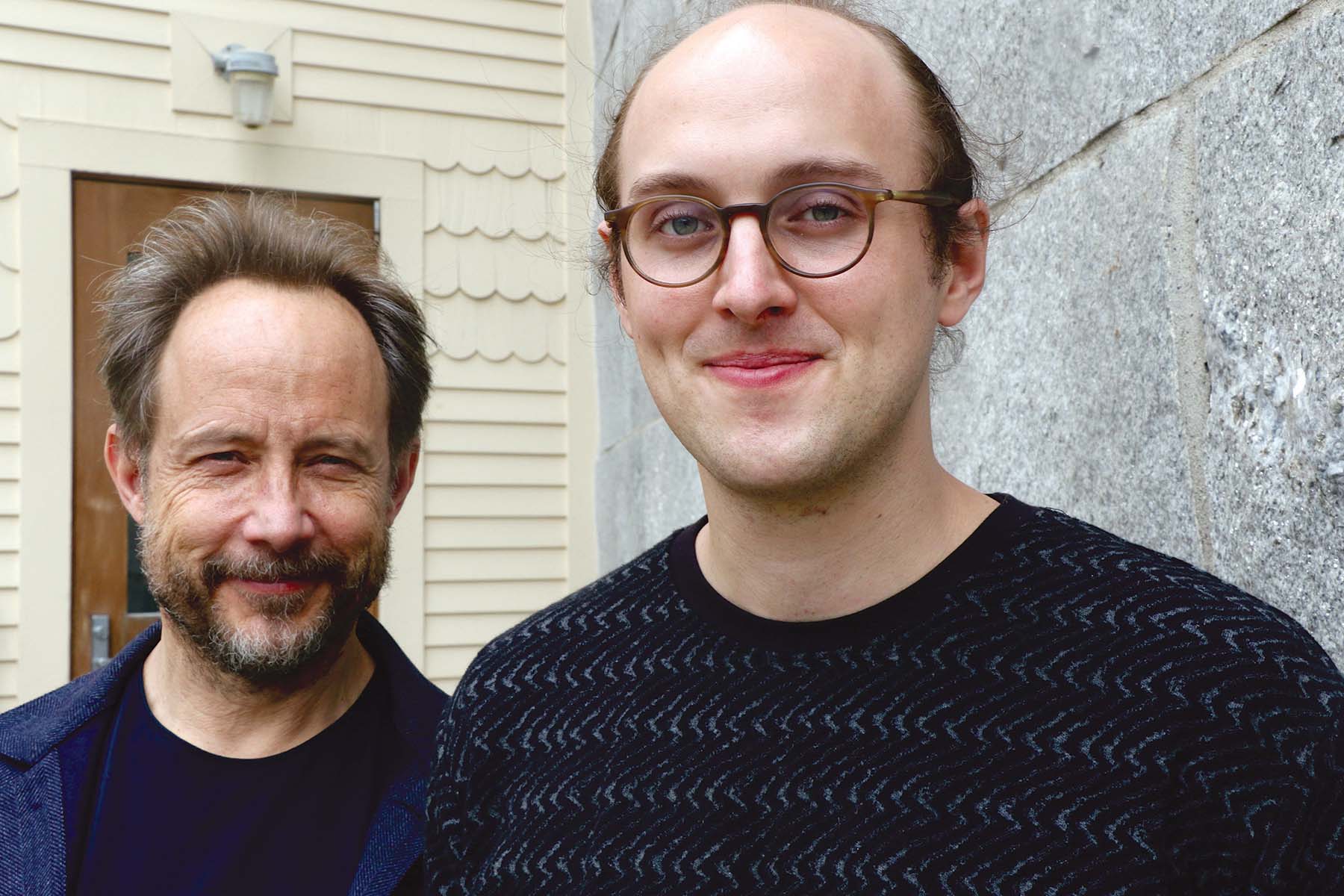 “When I first read Mr. Burns nearly 10 years ago, I was immediately drawn to the play’s emphasis on the vital importance of theater as a community process for moving forward. ‘forward and through the hardships with resilience,” Draper explained. “The play was written before the COVID pandemic, but includes the backdrop of increasingly dangerous weather disasters brought on by climate change and the lingering threat of a global nuclear event. Two years after the start of the pandemic and two months after the invasion of Ukraine, we are all subject to waves of nostalgia for “Before”. The play posits that maybe we all have a hint of Bart Simpson in us, that peppy little thug, who will show us how to move on and on.

Mease joined the production and its ambitious scope.

“Anne Washburn imagines a human future after an unnamed societal collapse where theater artists use the detritus of our old world to create a new culture, first as a way to rebuild trust and common ground, then as a nostalgic escape, and finally as a ritualistic embodiment of a new creation myth,” Mease summed up. “The piece spans 83 years and asks the artists making it to truly reimagine everything we assume about what theater looks like and why we do it.”

“Through this process, I’ve learned that you really can do anything with virtually nothing as long as you think about it creatively!” said Kendall Schilling, a student from Middlebury taking part in costume designer Mira Veikley’s Production Studio Design course.

“For the first time, I was challenged to create something that I had never seen or done like before,” added Sajia Yaqouby, a classmate.

Mease and the students working with him focused primarily on designing masks and puppets for the third act – that of the farthest future.

“Much of the materials we used to make the masks and puppets are found/harvested/gleaned from recycling centers, so the design process was to translate these iconic characters: Bart, Homer, Lisa, Marge, Mr. Burns, etc. into materials that also remind these future theater makers of the long-gone world,” Mease explained. “We use blue soda cans, duct tape, ethernet cables, rainbow skies of electric wires, snow fences, memory foam, motherboards What has become useless in a world without electricity? 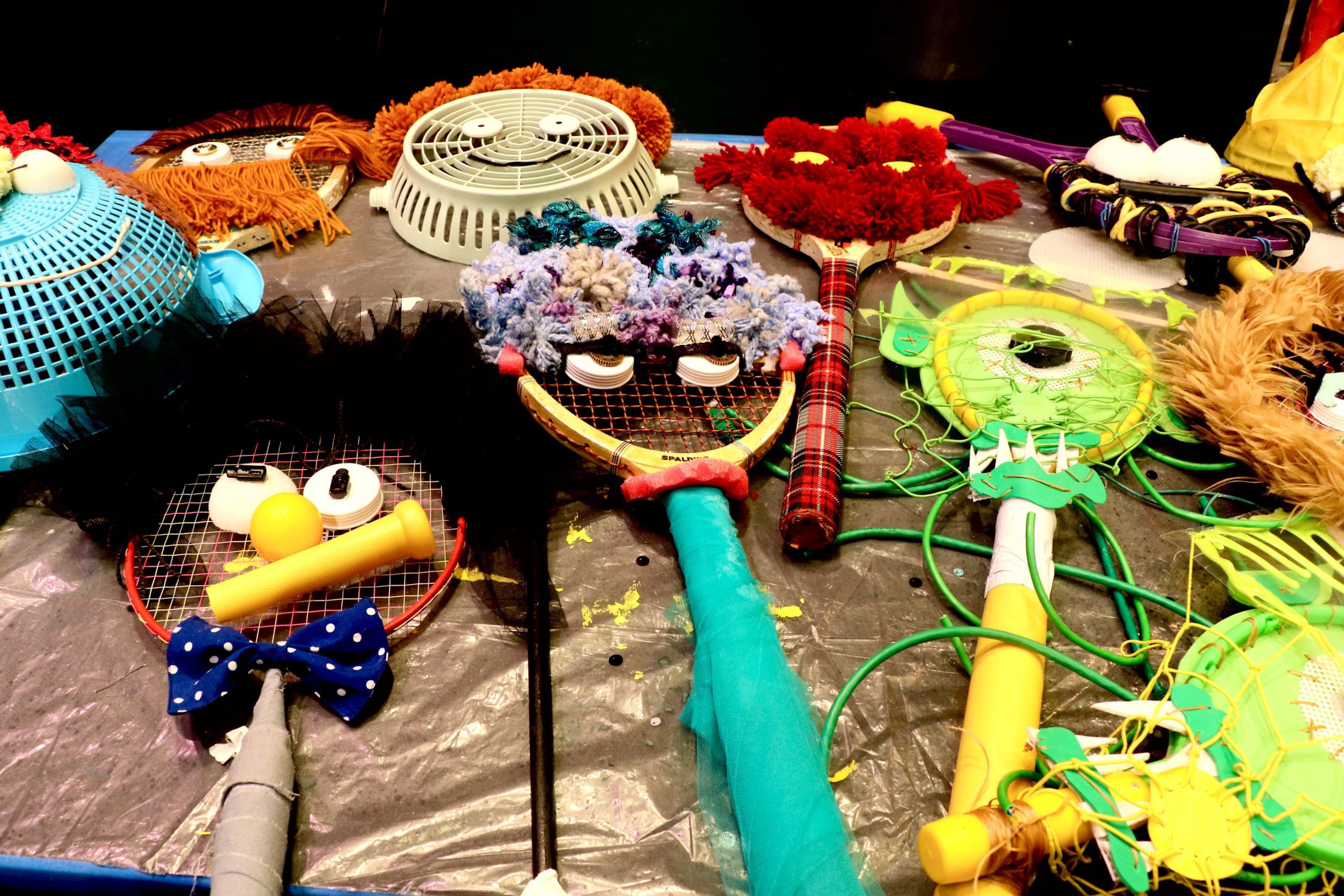 SOME OF THE “Mr. Burns” puppets.
Independent Photo/Steve James

“I was particularly inspired by how we used recycled materials and everyday objects to create these accessories,” said student Phoebe Davis.

“The puppets quickly became a welcome break and an exploration of our more creative sides,” added student Kylie Crow.

“I realized early on that the most important guideline for the design of this future theater was that the work, love and creativity of the creators was on display,” Mease added. “In earlier acts the characters are on the run, but in Act 3 society has taken hold and one way to show this is through beautifully hand-crafted masks and puppets. People don’t fear for their lives, so they have time to sit down and create a really cool piece of art! I hope the public will recognize a spark of the joy, beauty and silliness that went into the making of these masks and objects, and feel, in some way, the presence of every artistic soul that shaped the coin world.

Jim Dougherty designed the props with Mease; Mira Veikley is the costume designer; Allison Rimmer works in the scene store; and Carol Wood and Robin Foster Cole work in the costume shop to make the designs. With a cast and crew of students and direction by Draper, this play will be produced live at the Wright Memorial Theater from Thursday, May 5 through Saturday, May 7 at 7:30 p.m.

The production is open to the public and spectators must be vaccinated and masked. There will be a post-show discussion following the Friday night performance. The production lasts approximately 2.5 hours minutes with two intermissions.