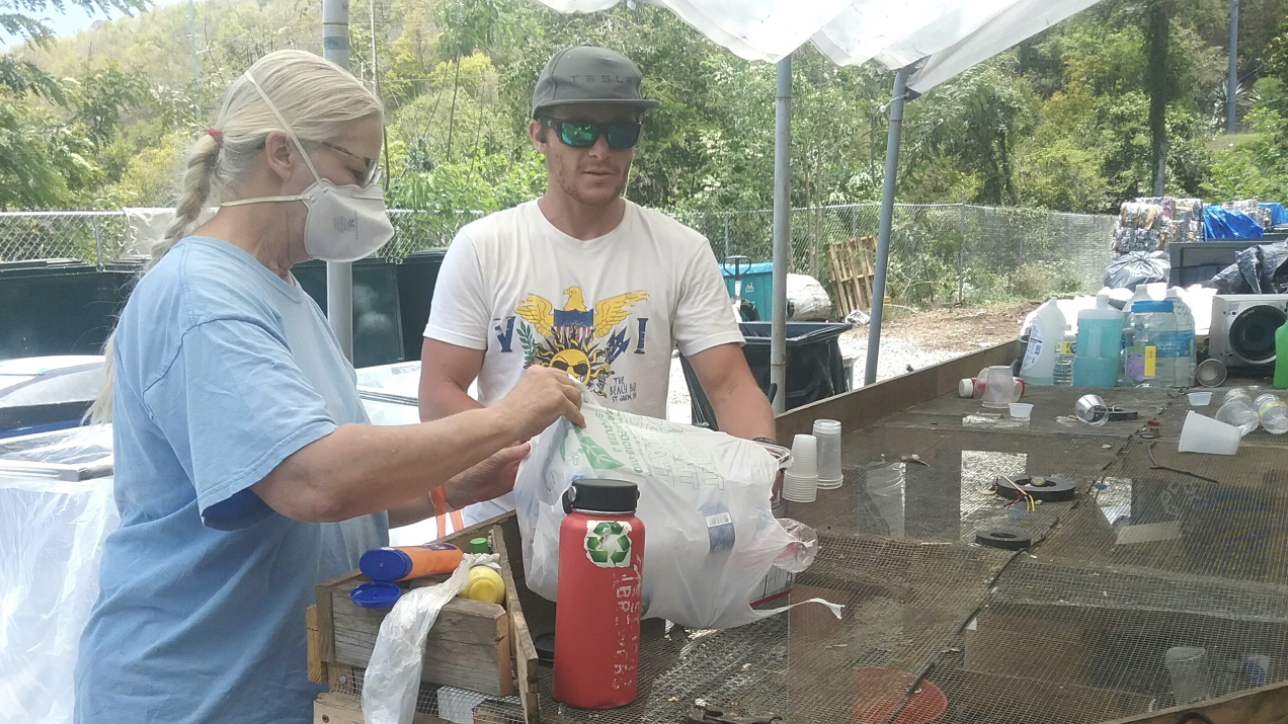 More than a ton of support for St. John’s Plastic Recycling

A forklift carrying 700 pounds of recyclable plastic heads for a converted shipping container in Susannaberg, St. John. This is the latest contribution to reducing the amount of discarded waste that could end up in the ocean.

Since launching its new plastic recycling program in January, the nonprofit group Island Green Living has collected and processed 3,300 pounds of materials. Operations Manager Anthony Novelli greeted visitors to the Susannaberg Donation Center on a Saturday morning, including a couple from Michigan whose family has been turning trash into treasure since 1905.

If the kind of recycling that takes place in St. John were done in the United States and on a larger scale, it would require industrial equipment, Novelli said. But for now, the equipment housed in the shipping container does the job.

“Our goal is to save ocean-related plastic; any type of plastic that is on this island is ocean bound plastic because we are less than 20 miles from the ocean,” Novelli said.

Volunteers help, he said, collect donations at the Susannaberg depot and conduct collections from businesses in St. John who pay to support recycling. Volunteers and two full-time workers also help sort, clean and prepare plastics for processing and packaging.

To show how it’s done, Novelli tosses a trash bag of materials onto a sorting table and selects canned goods and disposables. Any single-use plastic cannot be accepted. He holds up a straw and a plastic fork as examples of things that get thrown in a trash can. Clear plastic sheets are used to wrap items packed in crates. They get dumped too.

But beverage caps are another story. He gently tilts a barrel overflowing with colorful corks. These can be recycled, he said, but must be handled separately. On the side of the sorter is a row of bins, each marked with a number within a triangle.

Its coding is used to classify different types of plastics. Drinking water bottles and to-go salad bowls, yogurt containers, detergent bottles and juice pitchers each have an embossed symbol. Each finds its place in one of the numbered lockers.

Once processed, they will end up as flattened sheets of recyclables, stacked and wrapped between sheets of cardboard, bound with plastic bands and placed on one side of the yard. When the number of packages processed increases, a 40-foot container is brought in to load and transport them.

Looking at the results of regular processing, Novelli says each package of No. 1 processed plastic — the lightest type — weighs between 80 and 100 pounds.

The equipment was donated by Padnos, a recycling and waste management company based in Lansing, Michigan. Bill Padnos, son of company founder Seymour Padnos, and his wife Margy stopped by over the weekend to check on the program’s progress.

“People have been recycling since the dawn of time. Someone might have, say, a cracked pot, and they can’t use it like that, so they give it away. And it can become something else or be used in another way,” Padnos said. “One of the advantages of our business is that we recycle plastic, metal and wood. So if recycling here ever grows, we can accept different types of materials. »

So far, a total of 1.3 million beverage cans have been sent to a better place through the nonprofit organization’s recycling efforts, he said.