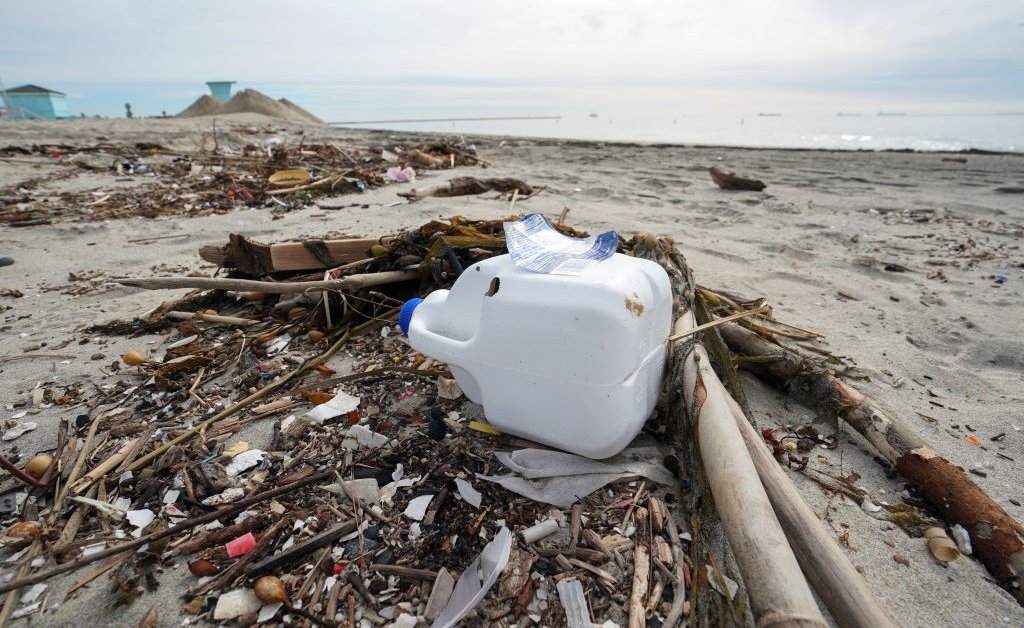 Plastic recycling was a myth. We live the consequences

A A few weeks ago, my friend Brett Pogostin showed me a photo of his girlfriend, Angie, taken on Padre Island National Seashore on the Gulf Coast of Texas. They had traveled 200 miles from Houston to visit this 60-mile stretch of undeveloped barrier island, which stretches south from Corpus Christi, Texas, toward the Mexican border. But when they pulled over and got out of their car, they found the shore littered with plastic – old diapers, water bottles and plastic detergent cans. The bathers had set up their blankets and umbrellas amidst the trash, and the children were building sandcastles between pieces of plastic. Brett and Angie got back in the car and drove nearly 30 miles trying to find an unpolluted stretch of beach, and finally gave up. Brett snapped a photo: Angie smiling under gray skies, bits of plastic trash mixed with sand at her feet.

The world is in the midst of a plastic waste crisis. Every year, the world produces around 400 million tons of plastic. In the United States, just 6% of this waste was recycled last year, compared to around 9% in 2018, as countries like China stop accepting American plastic. The vast majority of waste ends up in landfills, in the oceans or spilling onto land, an endless tide of chemically indestructible waste, polluting our coasts, infiltrating ecosystems and, when they break down into microscopic fragments, entering our body, with unknown health implications.

For years, the fossil fuel industry has turned oil and natural gas into plastic in huge, high-emitting “cracking” plants. In anticipation of falling demand for fossil fuels, it is currently investing $400 billion to expand plastics production, including an ExxonMobil-Saudi Basic Industries Corp facility. of 10 billion dollars under construction a few tens of kilometers from Padre Island, in the bay of Corpus Christi. The result, according to a 2020 study: 1.3 billion more metric tons of plastic dumped into our environment by 2040.

A version of this story first appeared in the Climate is everything newsletter. To register, click here.

For years, the people selling this plastic have avoided taking the blame for the ecological mess their products have caused, mostly by promoting a set of vastly false promises about our ability to recycle plastics, as well as a narrative – heralded in countless anti-litter advertisements – that managing plastic waste is the responsibility of consumers, not producers. But that can change. Last week, the California attorney general opened an investigation into the fossil fuel and petrochemical companies, accusing them of perpetuating a decades-long disinformation campaign.

Such a survey has never been attempted before. And that will likely add to the growing pressure the industry has been under recently. The plastics industry has a “target on its back,” Tony Radoszewski, president of the Plastics Industry Association, told attendees at an event last summer. “Some people are trying to bankrupt us.”

Globally, 71% of people think single-use plastic products should be banned, according to a 2019 Ipsos survey. Many African countries have banned plastic bags in recent years, while the EU has banned plastic bags. many single-use plastic items last summer. Last month, Los Angeles County banned restaurants from selling food in plastic containers that can’t be composted or recycled.

I am fascinated by the question of what makes a person, a city or a country change their mind about plastic, given how difficult it can be to accept that there is something monstrous in the world you take for granted. The evidence piles up and we relegate it to that dusty section of our mind reserved for the terrible things in the world that are too overwhelming or pervasive to really think about. Then, a new piece of information, a thought, a feeling, hits from a different angle, cracks the dam, and suddenly the sheer horror of the whole situation – of a clogged world, in every crevice, with plastic waste – arises. pours into the open.

For some, that moment came back in 2015, when a video of researchers ripping a plastic straw out of a sea turtle’s nose went viral. For others, it was reading about the plastic industry’s campaign of deception around recycling. For my editor Kyla Mandel, new research into how microplastics appear in human blood has heightened anxiety about what plastics are doing to us. For my friend Brett, it was the trip to Padre Island that did it. Upon his return, he purged all the disposable plastic he could from his life. He ordered soluble laundry detergent sheets and bought toilet paper wrapped in a cardboard box. “I hope you enjoy this meal,” he would say as he saw a colleague sit down with a pile of plastic containers, “because the planet will enjoy it forever.”

Brett is right on this point. The plastic we put into the world will be with us for hundreds of years, floating on shores and circulating through our bodies – and those of our children and our children’s children. There is hope of stemming the tide of new plastic pollution if we manage to delay corporate plans to keep expanding plastic production until we choke on it. But the tragedy of an irrevocably changed world is already here.

“There was more plastic on that beach than anyone could ever pick up,” Brett said. “And even if you did, there’s infinitely more in the ocean, and more would wash ashore.”

It was this grief for what we lost that woke me up. Brett has always loved the wild places of the world and he spoke of Padre Island with a tone of indignation. But there was pain beneath the anger, a hint of something like grief. And when I heard it, something inside me broke too.