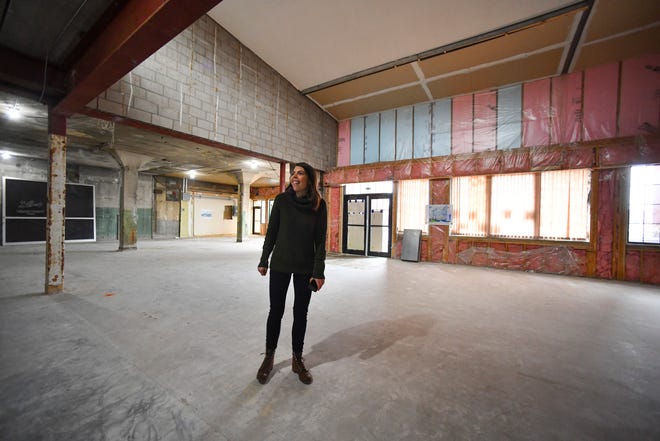 ST. CLOUD — In the cocoon of the old Liberty Bank building, a transformation has begun.

For several months, volunteers and salvagers cleaned the building so that the demolition crew could prepare for the construction of the Great River Children’s Museum. More than 11,000 volunteer hours were dedicated to salvage and deconstruction efforts, during which more than 50,000 pounds of salvaged materials were recycled or salvaged. The children’s museum earned more than $4,000 from recycling, said general manager Cassie Miles.

Now much of the building is virtually empty, waiting to become a children’s museum.

In 2020, the Great River Children’s Museum selected exhibit designers and began the two-year process of designing the six exhibits (five indoors, one outdoors) that will make up the children’s museum. Miles said the GRCM has completed the first phase of the process.

A structural engineer examined the building to make sure it is solid and the walls can be removed to open up the space inside, Miles said.

$7 million from the state

The physical efforts to create a children’s museum are accompanied by a continuous search for funding. Beginning this year, that effort includes a bill introduced in the state legislature to earmark funds for children’s museums in Greater Minnesota.

Of the $32 million mentioned in the bills, $7 million would go to the Great River Children’s Museum in fiscal year 2023 as a one-time appropriation. A paired bill, asking for money for the Rochester Children’s Museum, brings the total to $36 million, but was separated due to the logistics of building ownership.

As it stands, one state children’s museum (the Minnesota Children’s Museum in St. Paul) receives a direct annual appropriation. Miles sees value in this and would like others to receive similar funding.

The Great River Children’s Museum works with the Greater Minnesota Children’s Museum Coalition, and all seven members are applying for state funding. Miles said six of the museums received a one-time appropriation from the last session of the Legislative Assembly, but the museums would like that to continue.

“We all go into a pool of grants and then we sort of compete against each other,” Miles said of the Arts and Cultural Heritage Fund money. “And we don’t really like to compete with each other because we serve the same mission to different families.”

Wolgamott said he would like to see out-of-state children’s museums catch up on funding with the Minnesota Children’s Museum.

“There’s kind of a gap in funding for children’s museums in Greater Minnesota,” Wolgamott said.

Wolgamott said communities that invest in children’s museums see economic returns on that investment, including direct and indirect expenses and job creation, as well as a positive impact on early childhood development, family ties and increased intercultural competence and inclusion.

“Everyone is going to benefit from this amazing space in our community,” Wolgamott said.

During its low-key fundraising campaign, which seeks support from community leaders, businesses and collaborative groups, the Great River Children’s Museum has raised more than $5 million of its overall goal of $12 million, Miles said. While state funding adds up to reach the goal, there are strings attached to that $7 million. Therefore, Miles said, the GRCM would still like to increase a bit above that should statutory funding come through.

Building for the future

And in addition to funding the current project, the team is already thinking about access and sustainability in the future. According to Miles, the GRCM is trying to build an endowment to support general operations, including programs and discounted museum access.

Miles said she feels good about the momentum the volunteers, staff and community have created.

“We’ve made a lot of progress,” she said. “It’s all the things you can’t see behind the scenes when you’re preparing to build a facility like this.”

If you’re eager to get a glimpse of the museum, the GRCM has partnered with the Great River Regional Library on a set of preview traveling exhibit experiences currently planned for 21 libraries. Exhibits will feature rotating experiences; what you see one week at the library will be different the next week at the same library, Miles said.

These exhibitions will begin in May in Annandale. The first cohort of exhibits will be hosted in Annandale, Richmond, Paynesville, Clearwater, Becker, Pierz and Swanville.

Why are consumer goods companies supporting the development of new plastic recycling technologies?