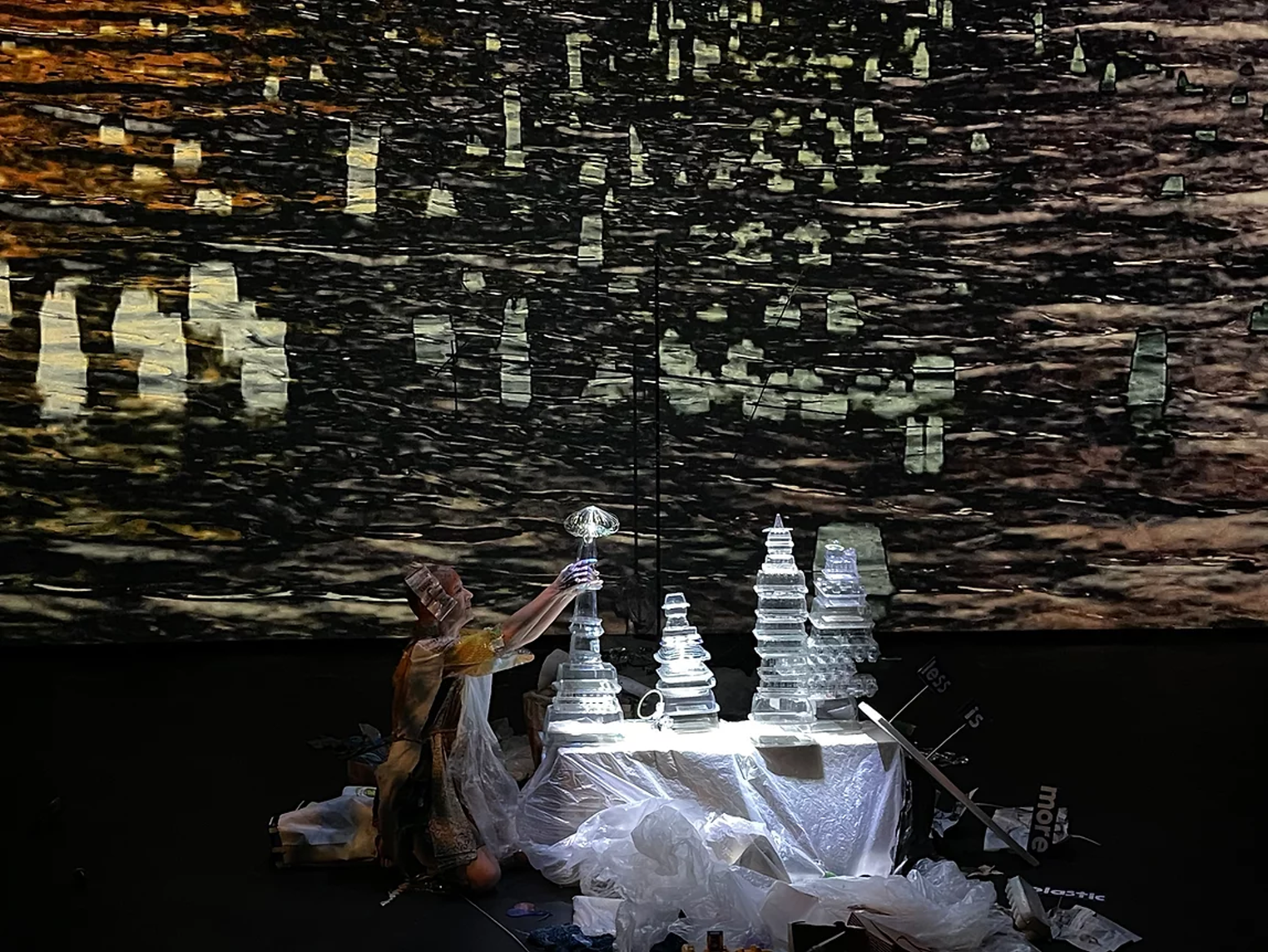 Twelve things to do in Denver this weekend, March 24-28

This final weekend in March is action-packed, as some venues close the curtains on current shows and others debut. Along the way, you get to see puppets and fashion…and have fun.

Check out our list of free things to do here; we finished the art openings here. Keep reading for a dozen events around town that are all worth the price of admission.

Theater Now or Never: Tipping Point Tales
from Thursday March 24 to Saturday March 26, 7:30 p.m.; Sunday March 27, 4 p.m.
Dairy Center for the Arts, 2590 Walnut Street, Boulder
Betsy Tobin’s work is not a puppet show. Although Boulder’s multimedia performer is an artist who wields a variety of puppets, depending on the effect she wants, they are simply magical props. His last show Tipping Point Tales, is a cautionary tale about the importance of slowing consumer-generated waste by upcycling and upcycling used objects and materials – which it does, with musician Janet Feder, who uses homemade instruments to play the music alongside Tobin. See what happens during a four-day run to the dairy; get info and tickets, $12-$20, here.

Grandpa, me and César Chávez
from Thursday March 24 to Saturday March 26, 7:30 p.m.; Sunday March 27, 2 p.m.
Su Teatro, 721 Santa Fe Drive
As part of Su Teatro’s fiftieth anniversary season, it is revived Grandpa, me and César Chávez, a play written and directed by Anthony Garcia, playwright and resident artistic director of Su Teatro; the show coincides with the sixtieth anniversary of the founding of the United Farmworkers. This is the final weekend of the musical which started as a school tour production in 2003 and then morphed into a full-fledged production. Tickets are $17-$20; Catch them here.

Mailbox: Artibus Theater
from Thursday, March 24 to Sunday, March 27, 8 p.m.; 2 p.m. on March 27
Savoy Denver, 2700 Arapahoe St.
Curtis Park’s Savoy, now owned by physical theater specialists Meghan Frank and Buba Basishvili of Theater Artibus, remained quiet during the pandemic and then closed for renovations. Now the Savoy’s new upgrades are unveiled with a side of Mailbox, a funny sci-fi comedy played in a silent movie style, right down to the exaggerated movements and framed titles used in the big screen age. The work is tied to a true story of an unlikely project in Tasmania and wraps up this weekend. Tickets are $19 to $48 at Eventbrite.

Wandering Wet Plates with Jessica Rowell
Friday March 25, Saturday March 26 and Sunday March 27
RitualCravt, 7700 West 44th Avenue, Wheat Ridge
If you’ve never sat down for a tintype — a form of vintage photography done on a lacquer or emulsion-coated metal plate, using a huge box-shaped camera — you can wind up the time at RitualCravt. Wandering Wetplates will prepare and film footage once each subject has been made into Victorian attire by costume designer and stylist Jessica Rowell. The cost of a tintype and style ranges from $150 to $240; appointments are scheduled by the hour only, until 7 p.m. Choose a time slot and image size here.

Art of culture: Colcha with Necha
Saturday March 26, 12:30 p.m. to 2 p.m.
Museum of the Americas, 861 Santa Fe Drive
In connection with the new exhibition Malinalli on the rocks, the Museo de las Americas welcomes the artist Vanessa Vasquez, specialist in the Spanish colonial tradition of the colcha, a beautiful style of embroidery practiced a few centuries ago in the Southwest and more particularly in the south of Colorado and the north from New Mexico. Learn about Vasquez’s use of the technique of imagery of the natural and religious worlds, which is a staple of the Spanish Colonial Market in Santa Fe. Tickets are $10-$15 here.

What did Charlie Price and his Fashion West team dream of? Short-lived, their Spring 2022 show? The best of the West, as far as local designers go, including Matilda Marginal managing the edgy edge on the runway and Mona Lucero capturing the Southwest with a lightweight new series of Clint-Eastwood-worthy ponchos in fabulous fabrics that you can buy on site during an ephemeral pre-show market with around fifteen vendors. And that’s just teasing. Get your tickets, from $25 to $240, hereand don’t miss the after-party at Tracks.

Coffee and cold readings: Puerto Rican nightlife
Sunday March 27, 6:30 p.m.
Bug Theater, 3654 Navajo Street
Think of Coffee & Cold Reads as the street-level version of the DCPA’s Colorado New Play Festival. As part of Higher Ground, a new BIPOC play development program launched by Bug Theater with support from IDEA Stages, Sasquatch Productions and Control Group Productions, this is your first chance to see and participate in a dramatic reading of Puerto Rican nightlife, a boundless work in progress from Denver-based Puerto Rican author Jonathan Marcantoni. If all goes well, the completed drama – based on the events surrounding the 1978 Cerro Maravilla murders, in which two Puerto Rican militants were ambushed and shot by police – will be fully staged in August. Admission is $10 for reading only, or $25 which includes the August performance. Learn more here.

Refuge
Until April 9
Curious Theater, 1080 Acoma Street
The Curious Theater Company approaches the border situation in a folkloric way with Refuge, a play by Satya Jnani Chávez and Andrew Rosendorf that tells the bilingual story of a young Honduran immigrant heading north to Texas. The production has a touch of magical realism, traditional music and puppets; Curious commissioned and developed the work, which won the Edgerton Foundation New Play Award, with help from transcreator Mari Meza-Burgos, who helped shape the shifting languages ​​of the script to make sense between two cultures. Reserve tickets, $35 to $50, here.

Hurricane Diana
Until April 10
Aurora Fox Art Center, 9900 East Colfax Avenue, Aurora
In Hurricane Diana, Obie-winning comedy by Madeleine George, a brave permaculture gardener covers up her true identity: the Greek god Dionysus, whose goal is to right the world, right the wrongs of climate change and runaway civilization to bring Earth back in its pristine beginnings. What’s funny in that? It all takes place in the suburbs, where a quartet of New Jersey housewives catches fire. Janae Burris is the leading lady, making everything perfect for a great night out at Aurora Fox. Get information and tickets here.

Nashville Ballet, Lucy Negro Redux
Tuesday, March 29 and Wednesday, March 30, 7:30 p.m.
Gates Concert Hall, Newman Center for the Performing Arts, 2344 East Iliff Avenue
Denver is the lucky winner of a two-night Nashville Ballet stand, with gorgeous chameleon MacArthur Fellow Rhiannon Giddens providing and performing the score for the evening’s centerpiece, Lucy Negro Redux. The Nashville original is based on poetry by Caroline Randall William, who speculated that Shakespeare’s love sonnets were about a ‘Fair Youth’ man and a ‘Dark Lady’: the black Lucy Negro. Giddens, whose repertoire as a singer and musician is an encyclopedia of American music, brings dance to life in a beautiful interdisciplinary production. Find information and tickets, from $27 to $63, here.

Do you know of a big event in the Denver metro? We’ll be updating this list throughout the weekend; send information to [email protected]